H, an imaginative artist and culinary fanatic, secures a rare invitation to eat at Bistro A in midtown Manhattan.  He endures one difficult test after another in an effort to win the chef’s admiration and prove he’s worthy of sampling the restaurant’s famed fricassée. 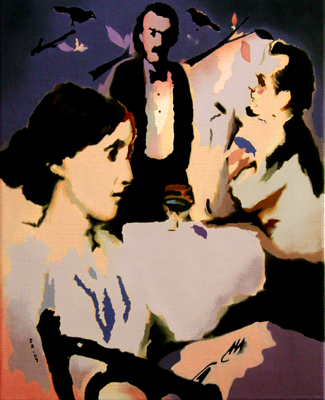 Bistro A looks closely at how chefs, restaurant staff and restaurant patrons operate and interact, and how cooking, serving others and eating are some of the great joys in life.  Given the expression, “Three hours to prepare, five minutes to eat,” the novel aims to show that the greater joy is found in the former, rather than the latter.  While Bistro A is serious food writing, it’s also poetic, humorous, fanciful, even wacky at times.

Bistro A is offered as an eBook in a Deluxe Edition with twelve original, full-color oil paintings by the author .

H, the principal character in the novel, sends a simple note to Bistro A :

It magically leads master chef Jean-Claude, the proprietor of Bistro A , to offer a rare and coveted dinner reservation at his restaurant.  H, despite a lack of formal culinary training, relates to Jean-Claude as a peer.  Bistro A , touted as “The Quintessential French Bistro,” is known for serving leisurely, traditional, home-style meals by invitation only to a local group of regulars, though it is oddly placed in hectic midtown Manhattan.

At the first meeting with Jean-Claude to plan the menu for next week’s dinner,

I was invited to join him at a table near the kitchen, its dark wood surface marred by decades of food service.  In a fit of passion, or reverence, a patron had carved the word fricassée in the tabletop.  The original carving was done, no doubt, with a sharply pointed instrument, but scores of patrons over the years had apparently retraced the letters, perhaps with fork tines between joyous bites of fricassée, widening the gouges, smoothing the flow of letter to letter.  How telling!  A memorable gastronomic experience immortalized and continually reaffirmed in hardwood.

Racine, Jean-Claude’s daughter, as serious about cooking as her father, offers H some French Breakfast radishes that appear to have just been pulled from the ground (not a small feat in midtown Manhattan), and slices of Jean-Claude’s country paté.  That prompts H to recall a picnic several years ago with his significant other, V, a free-spirit counterpoint to H, who served her country paté to H in soft grasses at the foot of three young poplars.  The time comes for H to choose a main dish for the dinner next week:

Chef Jean-Claude hesitates. “Not yet,” he decides.  “There will be other opportunities to have the fricassée.”

Apparently, H will have to work to win the chef’s admiration and prove he’s worthy of sampling the restaurant’s famed fricassée.

So begins a set of unusual, sometimes riotous, and always delicious experiences as H interacts with Bistro A staff and patrons, while seeking the mysteriously elusive fricassée.